Please enjoy our "member spotlights," which highlight our gold, silver, and bronze members. 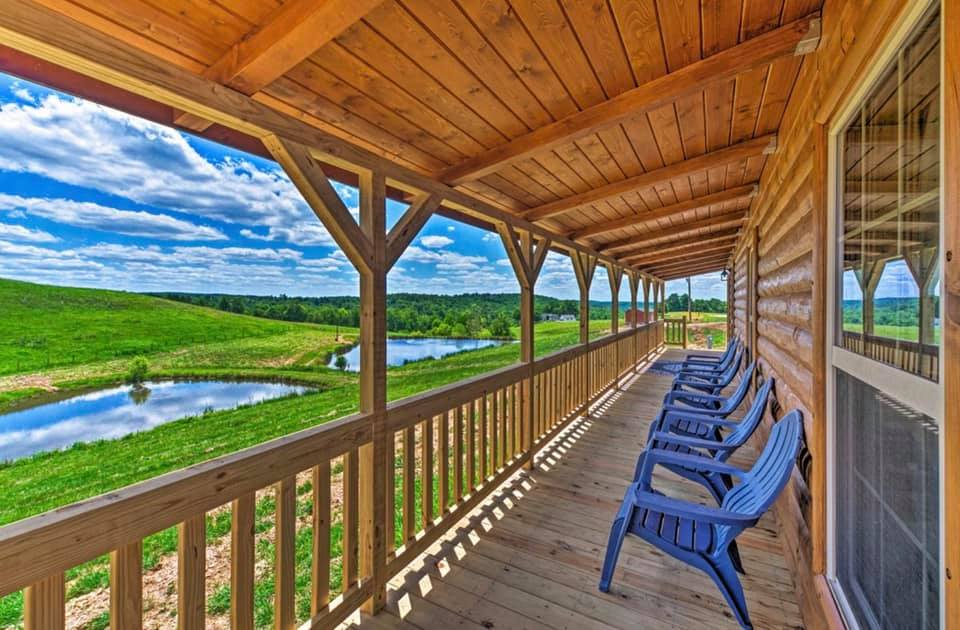 Mammoth Cave Cabin Rentals is a growing business that is not only a brand new Gold Partner of the Chamber of Commerce, but also a popular place for tourists to enjoy our area with beautiful views and excellent accommodations that is owned by Dagmar and David Rennaker.

Dagmar Rennaker was born in Germany but moved to America with her parents when she was very young.  She retired after 30 years as an Occupational Therapist and her husband, David, is retired from the Army and retired a second time from the Cintas Corporation.

They own "Flock and Herd Farm," which you can see in the valley on Brier Creek Rd.  They are avid animal lovers with five dogs, angus cattle, mini cows, sulcatta tortises, and mini goats.  Dagmar and David left corporate America six years ago to retire to the country and enjoy their farm.

They soon realized they needed to share their good fortune of living in such a paradise, and started this adventure with the cabins.  They now have 11 cabins on their 30 acres as well as a lake and 14 ponds in addition to several miles of hiking trails.

They have a pavilion for guest events, kayaks, and mini bass boats for use on the lake. They are also able to accommodate business meetings with a conference room nearby.

You can find out more on their Facebook Page or by calling (270) 735-3474 or by visiting mammothcavecabinrentals.com

Lake Forest Recruiting Firm, owned by Jay Holland, is a nationwide company based in Edmonson County that provides their clients with vetted, highly motivated, and qualified Behavioral Health Professionals.  They offer Psychiatrists, Psychiatric Nurse Practitioners & Physician Assistants, including an array of counselors and psychologists. They offer their Behavioral Health Professionals a secure and confidential search process tailored to their geographical, personal, and clinical interests.  Lake Forest Recruiting Firm provides services in all 50 states including Puerto Rico, Guam, American Samoa, and the U.S. Virgin Islands.

Owner Jay Holland started recruiting Psychiatrists and Psych NP’s back in 2012.  He eventually became Vice President at FCS Psychiatric Firm until 2018 when he left to become COO at Cambridge Medical Professionals.  After 3 years there, he opened Lake Forest Recruiting Firm.

He recruits and brokers the contracts for doctors and nurse practitioners specializing in Psychiatry--  Mainly Psychiatrists and Psych NP’s.  The firm sources candidates, schedules their interviews, and brokers their packages or contracts for their clients.  The clients can be hospitals, clinics, or a private practice.

Jay is originally from Scottsville, but has made Edmonson County his home for the last 10 years, with his wife, Alison Patton-Holland and their 3 children.

"This county is full of wonderful churches, schools, and fine people," said Jay. "I can’t think of a better place to raise a family."

"Lake Forest Recruiting Firm doesn’t rely on local patronage like most local businesses do," he continued. "Our clients are nationwide and in multiple U.S. Territories.  With that said, my wife Alison and I live here and are happy to be a part of this community. We want to do our part to ensure that Edmonson County prospers.  We try our best to support our schools, youth, and this county."

You can find out more at LakeForestRecruitingFirm.com

As the owner of a recording studio with years of experience in commercial audio production, Darren built relationships with several TV and radio stations, along with a host of professionals in the digital media world. It was during that time that he felt like Edmonson County was ready for a fully digital local news outlet that was updated on a daily basis.

The business model was unlike anything ever seen in Edmonson County, as it would not only be the first all-digital news outlet, but it would also be updated daily. The scariest part for Darren was that it would also be free to the public, as he would hope to gain advertisers and sponsorships to pay the bills.

EdmonsonVoice.com was launched in September of 2014 and had 6,000 readers during the first week. Those 6k readers begin to grow and within a short time the amount of readers had exceeded the total population of Edmonson County as “The Voice” now averages 15,000 users each week.

The Voice has all the features locals seek, like news, events, obits, sports and more.

The Edmonson Voice gained popularity on social media with a strong Facebook following along with Twitter and Instagram. The EV mobile app for both Apple and Android launched in 2017 and quickly acquired thousands of daily users.

In 2015, the EV signed a broadcasting agreement with Edmonson County Schools to be the exclusive provider for audio broadcasts and video streams of local sports and school events.

​Now entering its 8th year, what began as just an idea in the middle of the night is now Edmonson County’s number one source of local news and information that has seven staff members, is still updated daily, and is still available 24/7 with no subscription fee.

Since that day the Bank of Edmonson County has grown from a $15,000 entity to an over $200,000,000 enterprise. This has been accomplished by following the plan of its original founders and the board of directors as well as the hard work and dedication of the generations that have followed them in leadership roles. Through Bank of Edmonson County’s over 85 years in business, the leadership of the bank has cultivated such levels of respect and confidence from their fellow citizens that the founders dream of organizing the “new bank” in Edmonson County has become a prospering reality.

In 2003, after much thought, Bank of Edmonson County announced plans to build its very first branch in Bowling Green. The doors of the branch were opened on October 24, 2004 and it has seen steady growth since the first day of business.

As a member of the Edmonson County Chamber of Commerce, Kennedy PC Repair has had the pleasure of serving residential and business clients in the Edmonson, Hart, Grayson, and Warren County regions since 2006.

"I am very thankful to my clientele for their gracious referrals and recommendations to others over the years," said owner James Kennedy.  "Kennedy PC Repair strives to provide quality customer satisfaction to each client and situation, regardless of the job’s nature."

Services include: malware and virus removal, hardware diagnostics and repair, operating system (Windows and Macintosh) restorations, system upgrades and optimizations, home and office networking, data recovery and transfer services, mobile device support, and custom computer rig building.  Transportation of your personal equipment is handled by Kennedy PC Repair at no additional charge to you. Kennedy PC Repair is not compensated until the task is complete and the customer is satisfied,so whether you need a LCD screen replaced, a custom-rig built, or just need a question answered, feel free to contact James at Kennedy PC Repair.